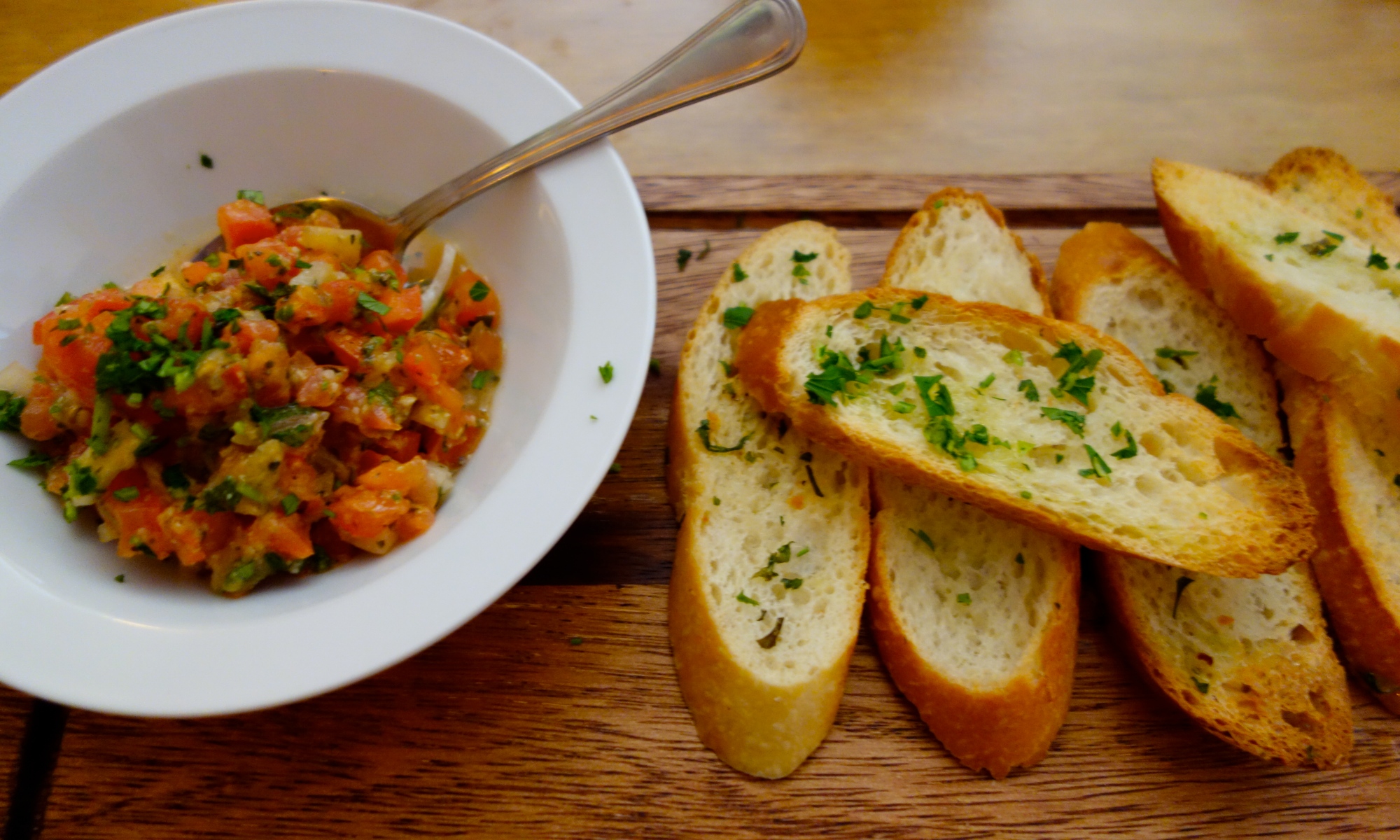 I’d started a post a couple of weeks ago to mark the milestone of my 100th post. Well, that was all fine and well, but then suddenly when I thought my life couldn’t get any busier, it did! In the most wonderful, exciting way mind you, but still, busy. More on that later. 🙂

A few weeks ago I met up with my friend Jenn for dinner on a random Thursday night. I owed her a dinner out and suggested a few new restaurants. She decided on Enzo’s and I happily agreed. Yum, more Italian food! 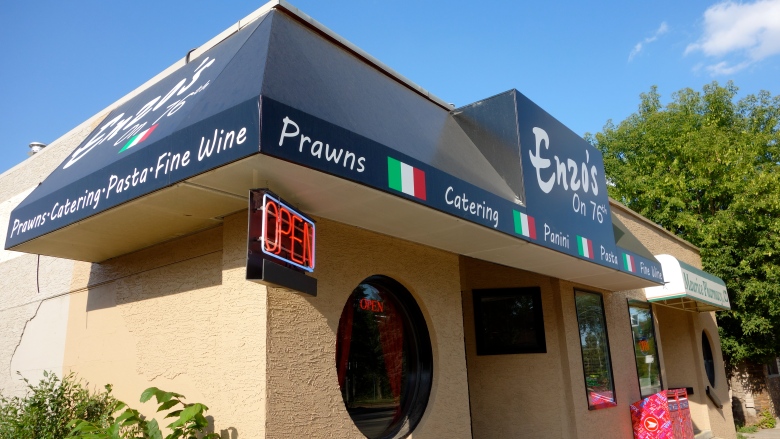 We met up after work at about 5:30 and the restaurant was about half full. It’s right in the middle of the McKernan neighbourhood and has a wonderful, warm and inviting atmosphere. It definitely felt like a neighbourhood place.

It had been kind of a crazy week for me, so I immediately went to the wine list and we decided to share a half litre of the House Red. As I found it was often done in Italy, the wine was served in small glass tumblers, rather than wine glasses, which somehow just added to the casual charm of Enzo’s. The wine wasn’t blow your socks off amazing, best wine ever wine, but it was a very decent, easily drinkable house red. Perfect.

After looking over the menu we decided it would best to share a few things so we could get a good feel for the food at Enzo’s. Before our bruschetta came out we were served some crusty, white bread with olive and vinegar that was swimming with garlic. Tons and tons of garlic. Don’t get me wrong, I love garlic, but it was a little bit of a surprising addition (and not necessarily in a bad way) to the usually simple olive oil and balsamic vinegar. 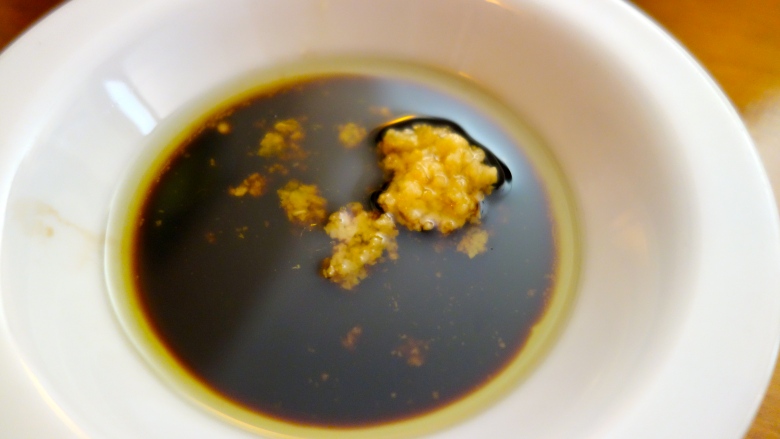 Our bruschetta came out next and this was also delightfully garlicy. The little toasts were served separately from the bruschetta, which was nice because it kept the bread from getting soggy. The only issue I had with the toasts was that they seemed to be balancing that fine line between being toasted and being dried out… and to me, maybe seemed to almost a little bit on the dried out side. 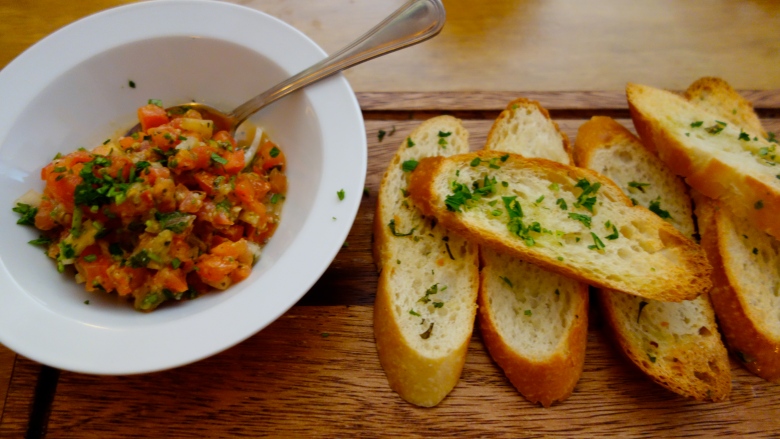 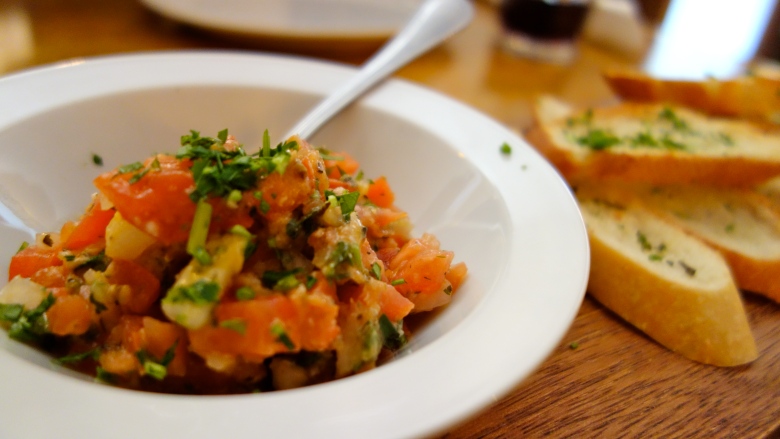 Next came out the main event, Linguine Pescatore which included king crab, scallops, shrimp, baby clams and fresh mussels with either white wine or tomato sauce (we chose the white wine sauce). The dish looked pretty good when it came out, hot and steaming with giant crab legs, mussels and huge shrimp on top. This dish was also (no surprise) very, very garlicy. The seafood tasted fresh and there was a decent amount throughout the pasta. There was more than enough food for Jenn and I; by the time we finished we were both stuffed. Although not so stuffed that we didn’t have room for dessert. 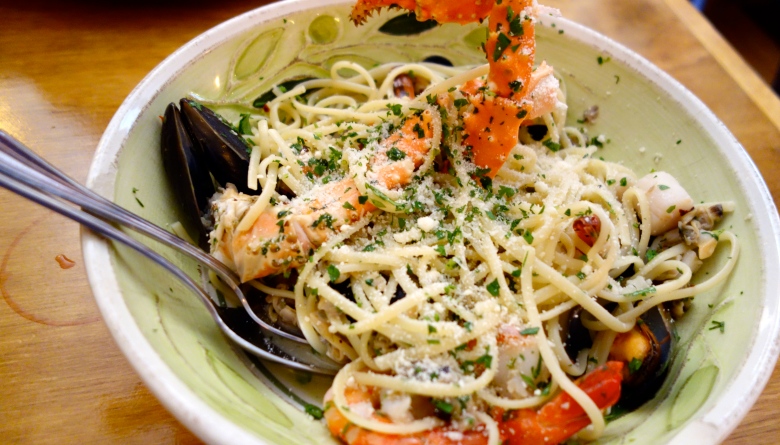 To finish off our meal we wanted to try to the tiramisu. The tiramisu was presented very nicely in what looked like an old-fashioned champagne glass and finished with a dollop of whipped cream, some fresh mint and a blackberry. It looked quite lovely and very appetizing. We both dug into the tiramisu and found that it tasted just as good as it looked. It was light and airy and very flavourful. The perfect end to our Italian meal. 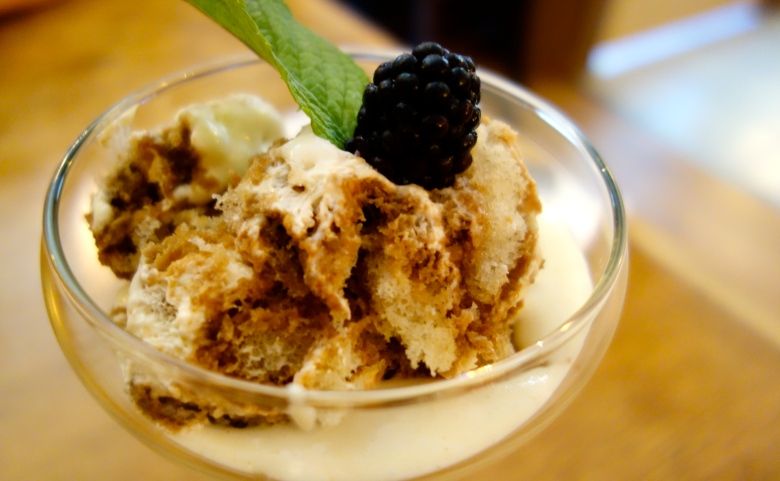 We both really enjoyed Enzo’s; we thought the food was quite good (and if I haven’t driven the point home enough already, very garlicy) and that the atmosphere was great. A great place to catch up with a friend over a delicious meal and some wine.

I actually ended up ordering pretty much the same items that I did at Cafe Amore: bruschetta, pescatore and tiriamisu. I think that Enzo’s won on the bruschetta, Cafe Amore’s pescatore was a little better and that the tiramisu was pretty great at both places.

I think Enzo’s is a gem in the south side; a casual and welcoming, neighbourhood eatery with deliciously filling Italian food.