A couple of weeks ago I received an email from the people behind Popbar inviting me to their opening event that day. I was actually planning to go to West Edmonton Mall anyway, so although the invitation was a little last minute, I was able to attend.

I got to West Edmonton Mall at about 5:30 and headed over to Popbar, which is located on the second level, right by the Tim Hortons on the ice rink. There was already a bit of a line forming, although no sign of any sort of special event activities. As I waited in line I was offered a complimentary mini Cream “Popgelato” Bar dipped in chocolate. The gelato was so thick and creamy, and the chocolate coating was made with wonderful, real, rich chocolate. It was like a really good, gourmet Dilly Bar. 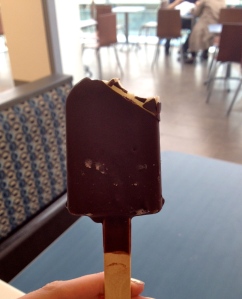 When I got to the front of the line, I asked for Reuben, as instructed in my invitation. It turns out, Reuben is actually the founder of Popbar, who had flown into Edmonton to help get the store opened. He generously invited me to try as many different Popbars as I wanted. The beautiful displays and mouthwatering flavours had me wanting to try just about every flavour there was, however, despite the temptation, I decided I should probably only try one more Popbar. After giving all of the delicious looking flavours some serious consideration, I decided on the Grapefruit Sorbetto. 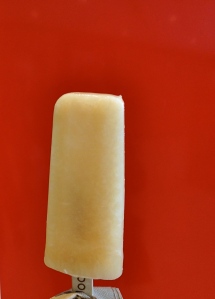 The Grapefruit “PopSorbetto” was perfectly mouth puckering, with just a hint of sweetness. It had such a great, natural grapefruit flavour and was wonderfully refreshing.

As I devoured my Popbar, I had the chance to sit down with Reuben and have him tell me a little more about the company and their vision. And I should mention that Reuben was actually born in Italy, so he knows good gelato. Popbar focuses on simplicity. Using only fresh and high quality ingredients to make their products. 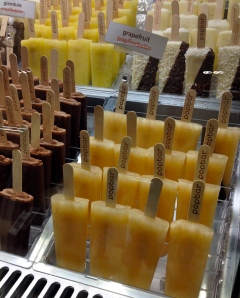 And do you know how I could tell the gelato was made with quality ingredients? The banana gelato was brown. Seem strange? Well, not really when you think about the fact that real bananas tend to go brown, not bright canary yellow. Just a little trick I learned while studying abroad in Italy. 🙂

I really did enjoy the treats I had at Popbar, however at about $4-5 a pop, they aren’t cheapest popsicle you could get. But then again, the quality really was there. 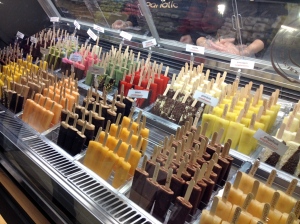 This is Popbar’s first North American location outside of their first location in New York. It’s very exciting to see that of all places they chose Edmonton. I think tourists will be very pleased to see Popbar when they visit West Edmonton Mall, however as a local, I think I would have preferred a location on Whyte Ave or somewhere Downtown, somewhere a little more scenic than an indoor shopping mall. For me, I would be more likely to specifically visit Popbar if it was in an area where I could wander around outdoors and enjoy the sites and sounds and then some refreshing gelato… but that’s just me. I suspect Popbar’s enticing displays will still bring many tourists their way in West Edmonton Mall.