Skip to content
After looking over the menu and discussing the options with our server, I decided on the Paloma, a delightful concoction of Tequila reposado and blanco, grapefruit juice, sparkling water, fresh lime, simple syrup and a pinch of salt. The cocktail had just the slightest hint of sweetness to it, which worked well with the tartness of the grapefruit and the punch of the tequila.

One Saturday night this past summer, I headed to Rostizado with my (now) sister-in-law, Lauren. The guys were headed out for Nick’s Bachelor Party and we thought we should also do something fun. As we walked in the door of the restaurant, at about 6:15, I was feeling less than optimistic about our chances of getting a table quickly, as you can’t make reservations and Rostizado is pretty popular. However, much to my surprise, we were told the wait would only be about 45 minutes. We decided to wait it out while grabbing a drink at Mercer Tavern next door. It turned out we ended up having to only wait about 20 minutes, so we practically shot-gunned our Mercer Sours and then headed back to Rostizado to grab our table. 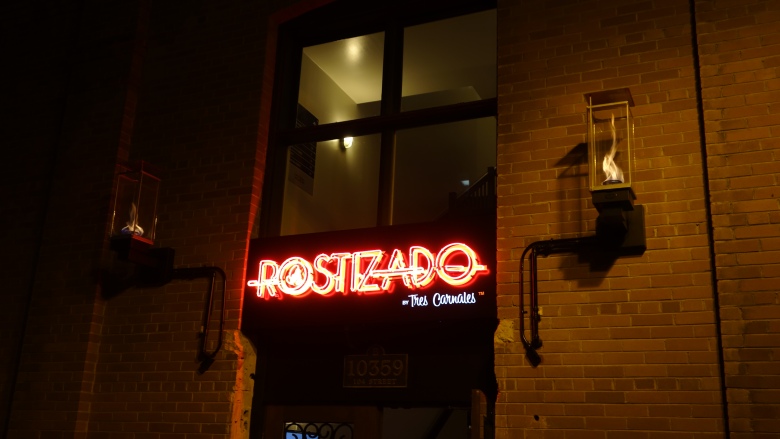 We were seated at what I can only describe as a bar of sorts, that overlooked the area where the meat was roasting. So we had a great view of all of the action going on in the open kitchen. There was, however, a walking space between us and the kitchen/ roasting area, which meant that there was a good amount of foot traffic going right past us. The staff at Rostizado were incredibly attentive, we were probably asked how everything was tasting about 10 separate times throughout the evening. Clearly everyone who works there takes great pride in the food they are serving.

After looking over the menu and discussing the options with our server, I decided on the Paloma, a delightful concoction of Tequila reposado and blanco, grapefruit juice, sparkling water, fresh lime, simple syrup and a pinch of salt. The cocktail had just the slightest hint of sweetness to it, which worked well with the tartness of the grapefruit and the punch of the tequila. 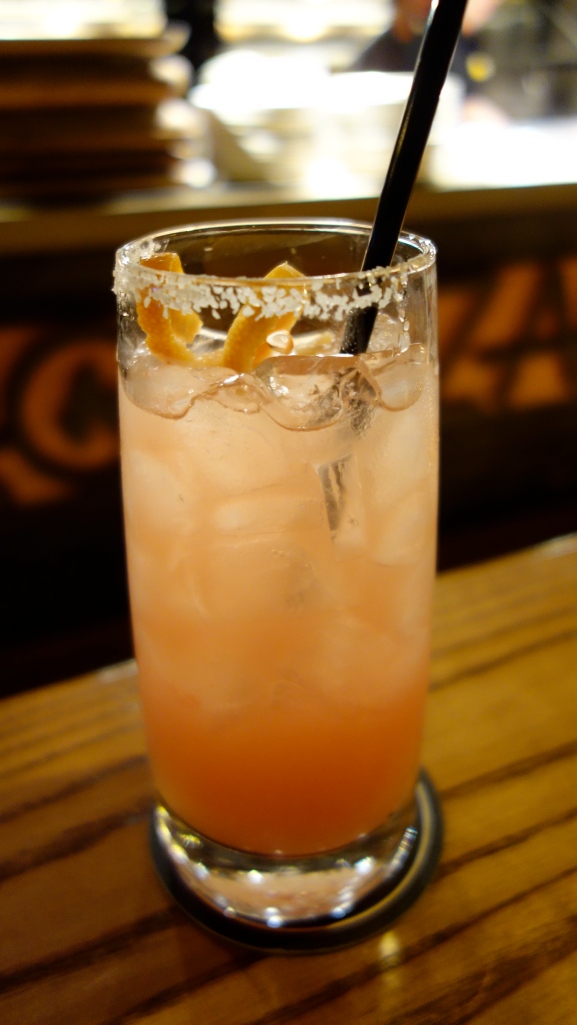 Lauren and I had been eyeing the ceviche to start, however after asking our server about how spicy it is, (apparently quite) we decided on the Smoked Salmon Sopes instead. Our appetizer was made with tequila cured salmon smoked with mesquite, served on a hand-made corn flour sopes, with an avocado cream salsa, radishes and white onion. I really enjoyed our starter, all of the different flavours and textures worked so well together. The soft and mild smoked salmon paired perfectly with the crispy sope, spicy avocado salsa and the bite of the white onion. 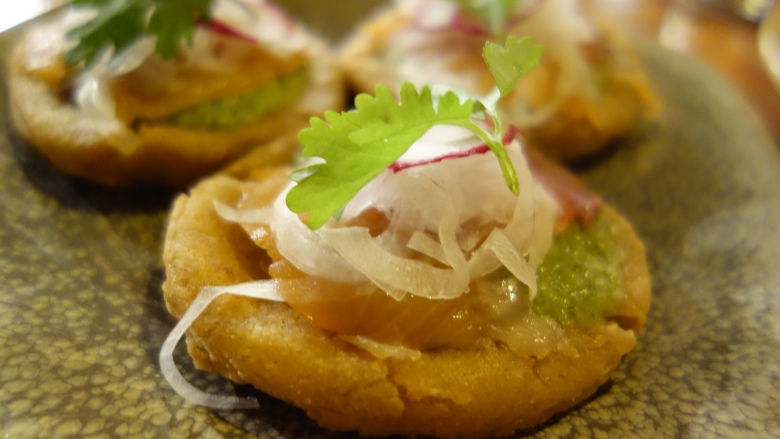 For dinner, Lauren and I decided on a half order of the Rosti-Pollo, which was served with Rosti-Papas and Tortillas. We also added a half order of the Cauliflower, to add some vegetables to the meal. The roast chicken was incredibly moist and very flavourful. I really enjoyed the combination of spices that was used to season the chicken. I was disappointed with the potatoes however. They had been described as having been cooked directly under the meat, absorbing the juices and fat as the meat roasted, which sounds pretty amazing in theory. So I was expecting the potatoes to be pretty awesome because, as we all know, cooking potatoes in animal fat is pretty much the best way to cook potatoes. But, alas, the potatoes actually seemed a little dry and lacking in flavour.

It turns out that I ended up enjoying the Roasted Cauliflower more than the potatoes, (which is a sentence I never thought I would ever write). The cauliflower was prepared with chile, garlic, cumin, lime juice and cilantro. The cauliflower was wonderfully crispy and just had so much flavour.

I had been warned that you get a lot of food at Rostizado, and this was, in fact, the case. We ended up having quite a bit of chicken leftover, but of course, we really wanted to try the Churros for dessert, so we made sure to save a little space. 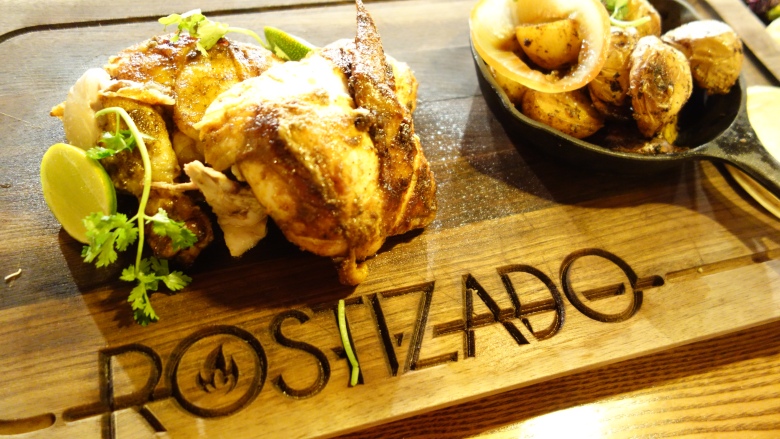 The Churros were sprinkled with cinnamon sugar and then served with a side of dulce de leche. And while the Churros were quite tasty, I think it would be pretty hard to screw up freshly deep fried dough. 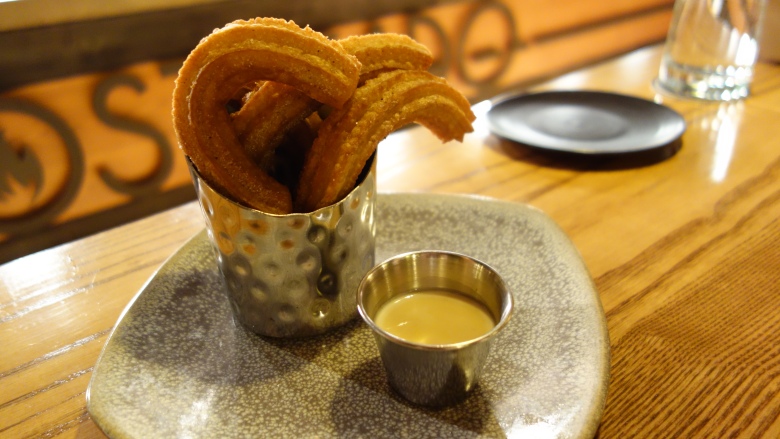 Lauren and I both really enjoyed our meal at Rostizado. In part, I think that is because we truly do enjoy other’s company, but also because it was fun to try somewhere new and interesting, like Rostizado together. I really did enjoy my meal at Rostizado, (especially the cocktail, the sopes, and the cauliflower), and it was a lot of fun to try more authentic Mexican food (which we sorely lack in Edmonton). I do think there are a couple little things that could be tweaked (sorry, those potatoes), but overall I am just always so happy to see restaurants serving up interesting, innovative, and delicious food, and not charging an arm and a leg for it. The prices at Rostizado were very reasonable and I’m quite looking forward to going back to try out some of the other items on the menu.