Skip to content
We all agreed that the food at Charcut was phenomenal. It wasn't fancy or fussy, just expertly prepared and exceptionally delicious.

As an Edmontonian, born and raised, I was brought up believing in the Edmonton – Calgary rivalry. But, over the years, I have come to admire some of the things that make Calgary a pretty great city, at the top of that list being an awesome food scene. Don’t get me wrong, I will never, ever cheer for the Flames, but I can appreciate some of the things that Calgary does well.

I have been wanting to visit Charcut Roast House in Calgary for a few years now, but the opportunity had never presented itself. This past weekend I was in Calgary meeting my new cousin and it seemed like the perfect opportunity to finally check out Charcut.

We were staying in Downtown Calgary and I was a little taken aback by how quiet it was there over the weekend. Charcut, however, was actually was quite busy, which was nice to see.

We arrived for our reservation at 7, and were promptly seated and provided the menu. First we looked over the drink menu, where my mom and I both opted for the seasonal drink, the Peach Gin Fizz, while my dad decided on a beer.

Next we tackled the food menu. Everything looked great, it was hard to make a decision, so naturally we decided to order a bunch of things to share. And that’s the best way to do it, in my opinion. We decided on the Skillet Sausage, Grilled Aviv’s Sourdough, Butcher Steak with Chimichurri and Wild Arugula, Prime Rib with Rosemary Jus, Grilled Asparagus with Yogurt, Dill and Feta, and Charcut Potatoes with Boar Bacon and Sour Cream.

First out was the Skillet Sausage and the Sourdough. The sausage, which was wine and cheese flavoured and made in-house, was phenomenal; excellent flavour and perfect texture. Sausage so often has a lot of fat and gristle, but that wasn’t the case here at all.

The chef also ended up sending us out a small selection of the charcuterie that is also made in-house, including the pig head mortadella. The consensus at the table was that it was all excellent.

Next out our giant platter of meat; such a beautiful sight to behold. And everything was ridiculously delicious. All of the beef was cooked to a perfect medium rare and was so incredibly flavourful. The chimichurri, which I’ve heard described as a Latin pesto, had a wonderful, bright flavour that paired perfectly with the rich, unctuousness of the butcher steak. I am already dreaming of next summer when I can attempt to make own chimichurri with garden grown herbs.

And let’s not forget the asparagus. So often vegetables are just a sad afterthought, but these asparagus were something special. They were grilled perfectly and then topped with one of the most delicious sauces I’ve ever tasted. There was the wonderful tanginess of the yogurt, a hint of dill and a touch of feta; everything perfectly balanced. You better believe I am going to be attempting to recreate this sauce at home, because I think it would be delicious on pretty much anything. 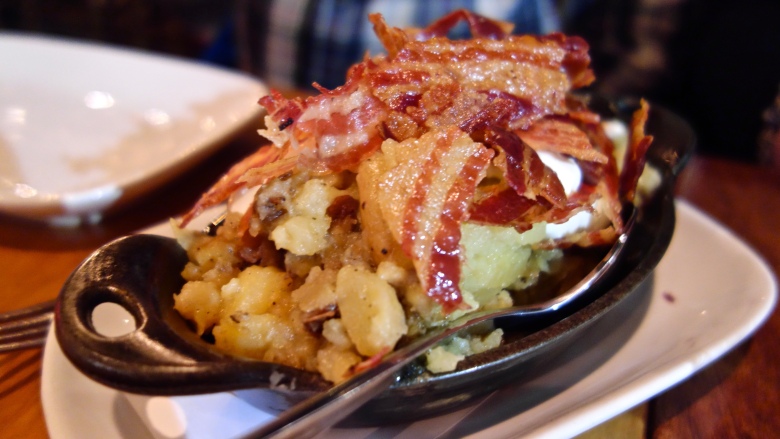 And then, the potatoes. What is good steak without some delicious potatoes?  The potatoes were slightly smashed and roasted and then topped with a generous amount of tangy sour cream and a ton of crispy boar bacon. So incredibly tasty. 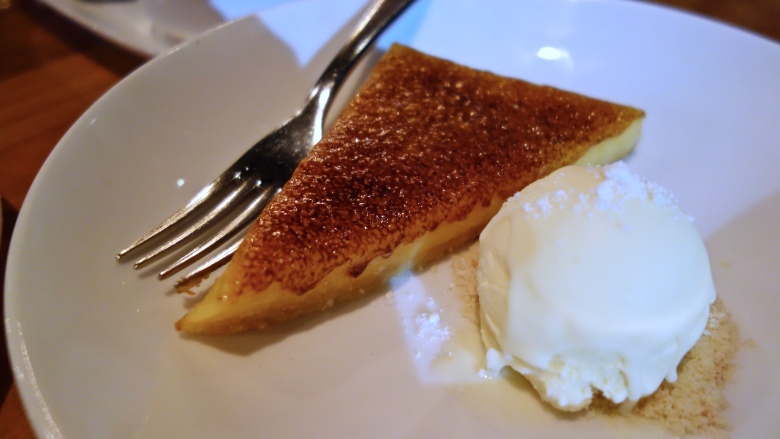 We saved just a little bit of room for dessert, so we shared the Lemon Tart. The tart was good, and I really enjoyed how the top was brüléed, however it could have been just a touch more tart and lemony for my taste. But that’s just me.

And lastly, as if we hadn’t already eaten enough, we were sent out some fresh-baked chocolate chip cookies. Soft, chewy, chocolatey perfection.

The presentation was fairly simple and rustic, which allowed the gorgeous food to take the spotlight. Truth be told, this is probably my favourite type of food. It also doesn’t hurt that I am a true Alberta girl who loves her Alberta beef, and man does Charcut know how to treat a piece of meat.

We also agreed that while our meal was delicious, it certainly wasn’t cheap. But, it’s not like that was a surprise. Often, with really great food, you get what you pay for.

I would absolutely return to Charcut and I would not hesitate to recommend it to anyone… well, unless maybe they were a Vegetarian. And if that were the case, I would probably say it’s worth a cheat day.