Skip to content
It was fun to try Union 613 for brunch and I really liked that when they could possibly make something in house, they did. Even the little things, like the ketchup for example, which is probably easier to just buy, they took the time to make from scratch.

Last weekend we met up with another couple, Matt and Claude, to try out Union Local 613 for brunch. I had heard really great things about Union’s cocktail list and fried chicken, so it was somewhere that was already on my list of restaurants to try. I am generally not the biggest brunch person (this can be directly attributed to my distaste for eggs) but I am usually game when I can find something interesting on the menu and if it means going out with friends.

We met up at about 11 on a Saturday morning and I was surprised to see that the restaurant was fairly empty. As our meal went on it got busier and busier and by the time we left, just after 1, the place was almost full, so we must have just beat the rush.

As Union 613 is known for their cocktails I was not surprised to see a brunch cocktail list, but I decided against trying anything myself and opted to steal a few sips of Byron’s drink instead.

Byron decided on “This Is Not A Caesar”  which is made with cilantro infused hayman’s old tom gin, leyenda mezcal blanco, tomato/worcestershire/jalapeno shrub, muddled lemon, lime, cilantro, and union ring ‘o’ fire hot sauce. The “Not A Caesar” was true to it’s name in that it followed the flavour profile of a Caesar but was not in fact a Caesar. Byron said it was an interesting cocktail, but truthfully would have preferred a Caesar.

Matt also ordered a brunch cocktail, “Bukowski’s Breakfast” which was made with rye with Reese’s Puff infusion, cream and nutmeg. He said it was an interesting cocktail, but felt like something that he should be pouring in his coffee. 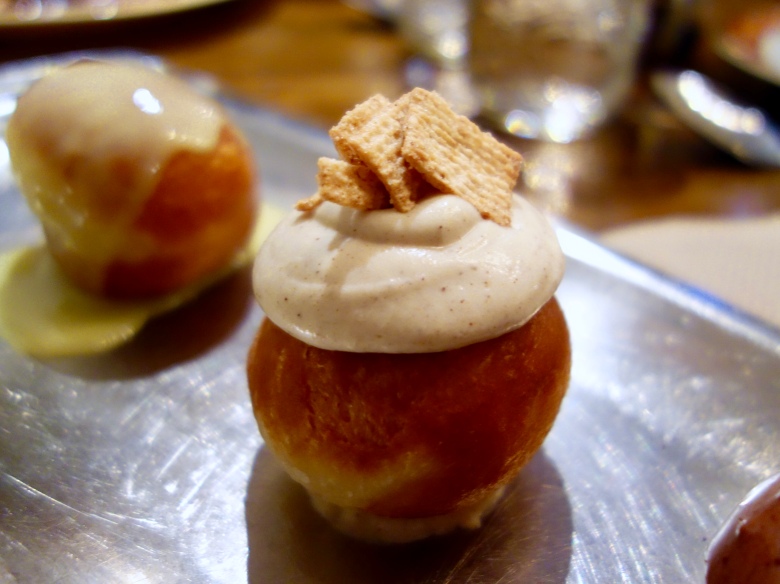 For brunch, I was tempted by the trio of Beignets, which were Cinnamon Toast Crunch, Coconut Pineapple and Mocha flavoured. Each beignet was quite tasty, however I think I prefer a classic beignet that is simply covered in powdered sugar. Sometimes there is no need to over complicate things! 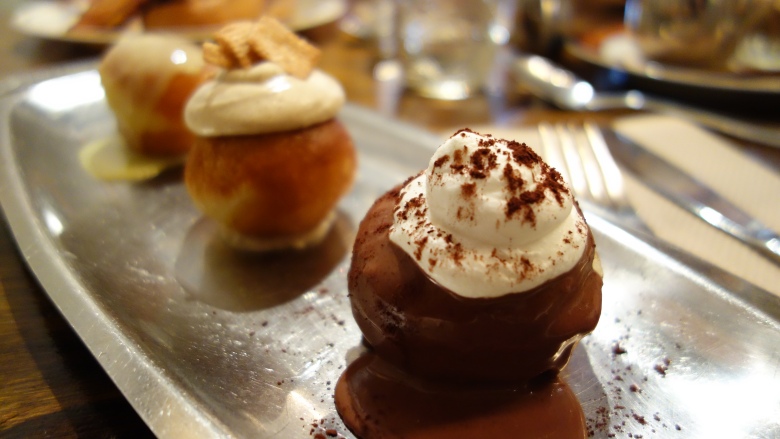 To make my meal somewhat more complete I also opted for a side order of the house-made sausage. The sausage had a nice meaty texture, a good balance of fattiness and a really nice flavour.

Both Byron and Matt immediately zoned in on the Fried Chicken and Waffle Sandwich, which was fried chicken, topped with a sunny-side-up egg, pickled green tomato, spicy maple syrup, and iceberg lettuce, sandwiched between 2 waffles and then served with a side of home fries. Everyone agreed that the Chicken and Waffles was quite tasty, but we noticed that the fried chicken appeared to be a patty rather than an actual piece of chicken, which was a little different.

Claude decided on the French Toast, which was topped with white chocolate whip, strawberries, peanuts, dulce de leche, and mint, and then served with a side of house bacon. She said overall she liked it, however it seemed like the plate was just a little too busy. There was a lot of stuff on the French Toast that didn’t really add to the overall flavour of the dish.

It was fun to try Union Local 613 for brunch and I really liked that when they could possibly make something in house, they did. Even the little things, like the ketchup for example, which is probably easier to just buy, they took the time to make from scratch.

Because I am not the biggest brunch person I would love to try some food from the dinner or late night menu, specifically the fried chicken that I have heard so much about and a couple of cocktails. Union has a really awesome vibe and I look forward to visiting again.