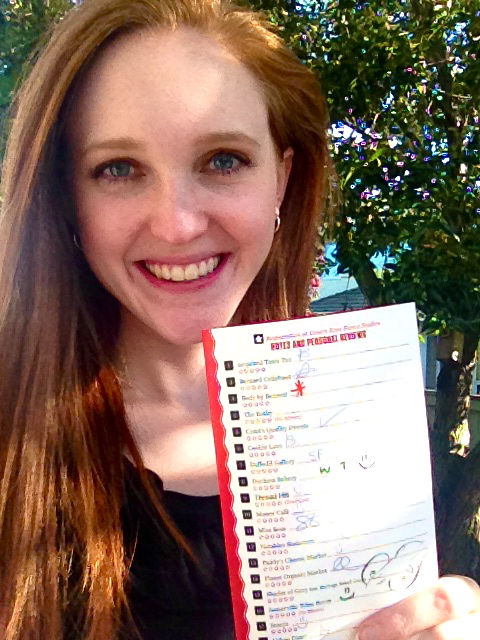 Ever since I started up my blog, I have been keeping my ears and eyes open for interesting food events going on around Edmonton. A few weeks ago my friend Lana suggested that we take part in the Red Shoe Crawl, a food event that benefits the Ronald McDonald House. So today, Lana, myself and my other friend Jenn, headed out to enjoy a beautiful afternoon on 124th street. For $40 we received a passport that allowed us to visit the various different Red Shoe Crawl locations on and around the 124th street area in Edmonton.

At about 12:30 Jenn and I headed over to Desert Rose Dance Studio on Jasper Ave to pick up our passports. We then headed over to the Starbucks on High Street to wait for Lana and plan our attack. There were 18 different locations on our passport and we were determined to visit them all. I didn’t snap pictures at all of the locations (sometimes the wine went down too fast), so I’ll just provide my 2 cents on the locations where I have pictures.

Our first stop was at the Manor Bistro where we were served scallop ceviche on endive and a glass of wine. I don’t know enough about wine to comment too much on many of the wines we tried, other than to say they all seemed to hit the spot. I have always enjoyed my meals at the Manor Bistro, however I didn’t love the scallop ceviche. The scallop itself tasted ok, however I found the endive to be too bitter and it overpowered the delicate taste of the scallop.

Next up was Paddy’s Cheese Market where we were served a cheese plate that included smoked cheddar, brie, goat cheese and some sort of French Canadian cheese from Quebec that none of us can remember the name of. I really liked the smoked cheddar and the Quebec cheese, as well as the goat cheese which was served with smoked salmon. I grew up eating stronger, often aged, cheeses, so I always tend to like cheeses that have a more “pungent” flavour. I haven’t been to Paddy’s in such a long time and I will be heading back soon to try out more of their delicious cheeses.

At Carol’s Quality Sweets we were treated to a “European chocolate made locally” which kind of seems like a bit of a contradiction… but either way it was tasty.

I was kind of surprised to see Body By Bennett on the passport and as I predicted we were served a fruit smoothie. It was tasty and refreshing, but nothing too exciting.

At Urban Diner we were served home-brewed iced tea and a pulled pork slider. The tea was refreshing and the slider was super yummy. I thought the pulled pork was just right, not too saucy, but it still had lots of flavour. It was also great to get a nice amount of solid food as I hadn’t eaten lunch before we started the crawl.

Miss Boss, a clothing store, was serving sandwiches from the Italian Centre Shop. I’d never been in there before, so it was a great excuse to peek in the store and see the different clothes and accessories that they have. The sandwich, like most things from the Italian Centre, was good, however I am not the biggest sandwich person so I didn’t eat all of it… I was also saving room for all of the other food to come.

At Steep’s on Stony Plain Road we were given the choice of 2 different teas: cinnamon rooibos tea or chai tea latte. We all chose the chai tea latte and sat down for a bit to enjoy our tea and rest our legs… or in my case my stupid hip. 😦

At the Duchess Bake Shop we were given a little goodie bag that included a shortbread cookie, a macaron and a chocolate chip meringue. Because of my stupid allergy to almonds, various fruits and veggies, I couldn’t eat the macaron as it is made with almond flour, however Lana and Jenn had some and reported that, as usual, it was delicious. I was able to indulge in the other 2 treats; the shortbread was buttery and wonderful and the meringue was light, chocolatey and delicious.

At the Bernard Callebaut Store… or wait, Cococo Chocolatiers as it is now known, we each got to choose a scoop of any of the gelati that were beautifully displayed in the store. The gelato was ok, I was a little disappointed, but maybe it was because I usually pick a refreshing fruit flavour like lemon or strawberry, however today I opted for semi-sweet espresso, which was very, very rich.

One of our last stops was at a relatively new business in the area, Cookie Love. Here we were given 2 little cookies, a traditional chocolate chip cookie and a reverse chocolate chip cookie, and the option to have a little glass of milk to go with the cookies. The cookies were good, but to me, nothing that special. I like my mom’s cookies better, so I probably wouldn’t go out of my way to go back there.

Overall, I had a wonderful time. It was a great way to spend a beautiful, late summer afternoon with a couple of girlfriends and explore an area of Edmonton that is experiencing an awesome revitalization. There were a lot of great wine spots on the passport and I wish I had known that in advance so that I could have organized a ride home. Being the responsible girl that I am, I couldn’t over indulge as I had to drive.

There are so many great neighbourhoods in Edmonton, full of lots of hidden gems just waiting to be discovered. I am looking forward to seeing what area of Edmonton next year’s Red Shoe Crawl will allow me to explore!